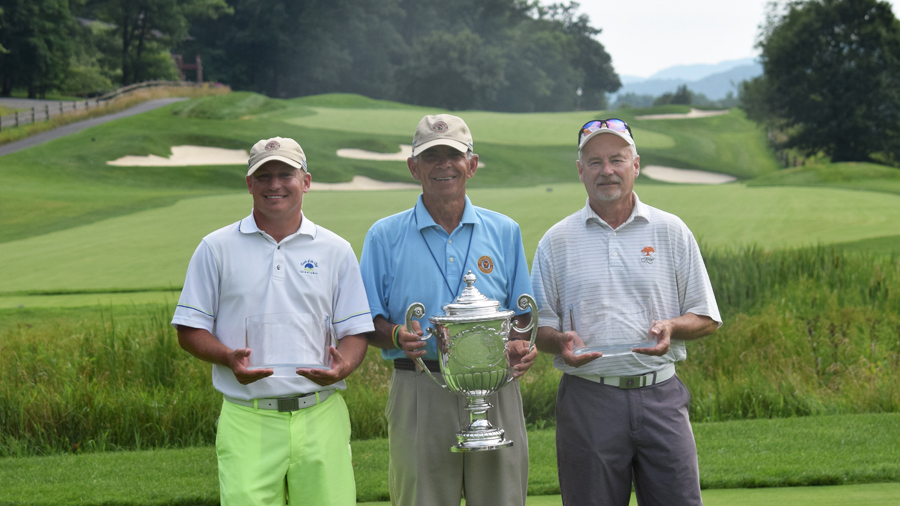 BEDFORD, Pa. – Tom and Andy Porsch of the Country Club of Harrisburg rallied from a two-shot deficit to fire a 66 in day two for a total of 135 (-9) to win the championship division of the Pennsylvania Golf Association’s 10th Father-Son Championship, presented by LECOM, at the Omni Bedford Springs Resort.  The pair finished two strokes ahead of runners-up and defending champions Don and A.J. Donatoni of White Manor Country Club.

The Porschs began the second round of the 36-hole championship at 3-under par after an opening round of 69 on the classic Donald Ross/A.W. Tillinghast/Spencer Oldham layout, and a slow start to the round at 2-over par through five holes on the day dug their hole a little deeper. But the pair played the final 13 holes in 8-under to rally and win the event, which was played in a modified chapman format in which both players hit a tee shot, and for the second shot, player A hits player B’s ball and vice versa, and then for the third shot they decide which ball to play and alternate strokes until the ball is holed. For the Porschs, they found their rhythm late in the opening nine and carried that through to the finish.

“I think we wanted to keep two balls in play off the tee and give ourselves enough chances, which we did for the most part out there today,” Tom Porsch said. “But we didn’t start well and had to play well to catch up.”

And play well they did, beginning with their first birdie of the day on the par-4 sixth. After another birdie on the eighth, they were at even par on the day and looking to make their move. The ninth hole, a 496-yard par-5, proved to be just the spot. After Tom’s second shot landed over the creek about 100 yards from the flag, Andy stepped up and hit a perfect sand wedge that bounced once behind the hole and spun back in.

“That one never left the pin,” Andy Porsch said of the eagle.

The wedge work continued for Andy, as he was dialed in on approach shots on No. 11 (to one foot), No. 12 (to two feet) and No. 13 (to five feet), all three times leaving short birdies that his father rolled in successfully.

At 8-under par, the Porschs were in the lead for the championship when lightning forced an 80-minute delay with the duo on the 15th hole. Once play resumed, they added another red number with another great approach by Andy, whose third shot on the par 5 from 45 yards out ended up about six feet from the pin, where Tom drained another birdie.

From there, they parred out to claim the title.

“This is such a great place to win,” Tom Porsch said. “We love the course, we love the hotel, we love it all here and they do such a nice job.” 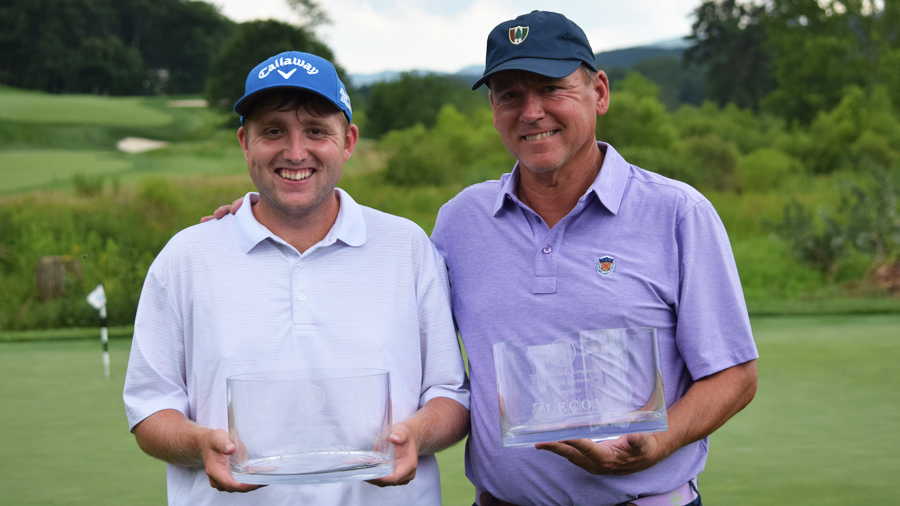 Gary Smith and his son, Cody, survived a four-hole playoff to win the forward gross division. They ended the 36-hole portion tied with Scott and Kevin Christie of West Shore Country Club, and the players began a sudden death playoff on No. 18. But after routine pars there (as well as on No. 4 and No. 5), the playoff ended on No. 6 when the Smiths made par to win. After both Smiths hit their drives in the left greenside bunker, Cody Smith splashed out the fringe, about 15 feet away, where his father, Gary, nearly holed the putt but settled for a short tap-in by Cody to make par. The Christies, meanwhile, had a chance to tie but couldn’t save par, giving the crown to Gary and Cody Smith. That came after each team shot a 5-under par 139 through 36 holes. 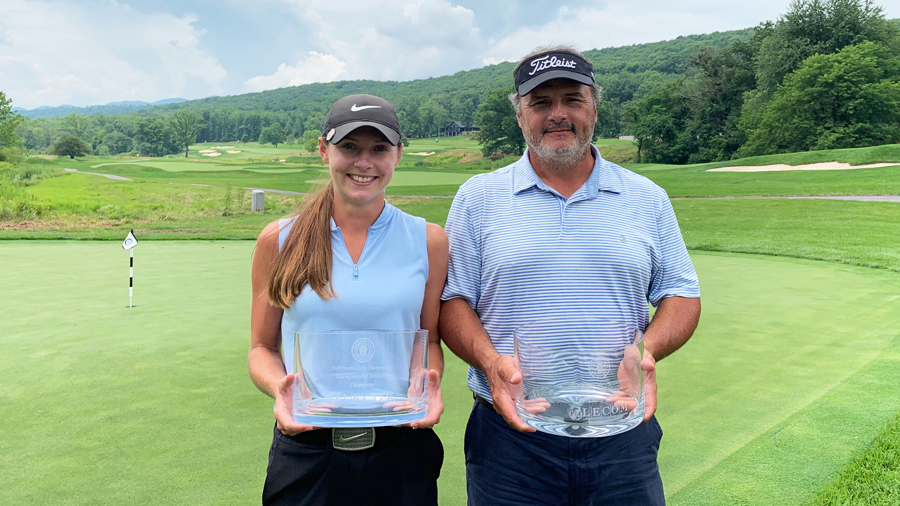 Also contested this week was the inaugural Parent-Child Championship and coming out on top in year one was the team of Allison and Robert Cooper of Colonial Golf and Tennis Club. They fired a 1-over par score of 145 to claim the crown.

“Allison played really well both days and carried the team,” Robert Cooper said. “We loved the course and loved the format out there.” 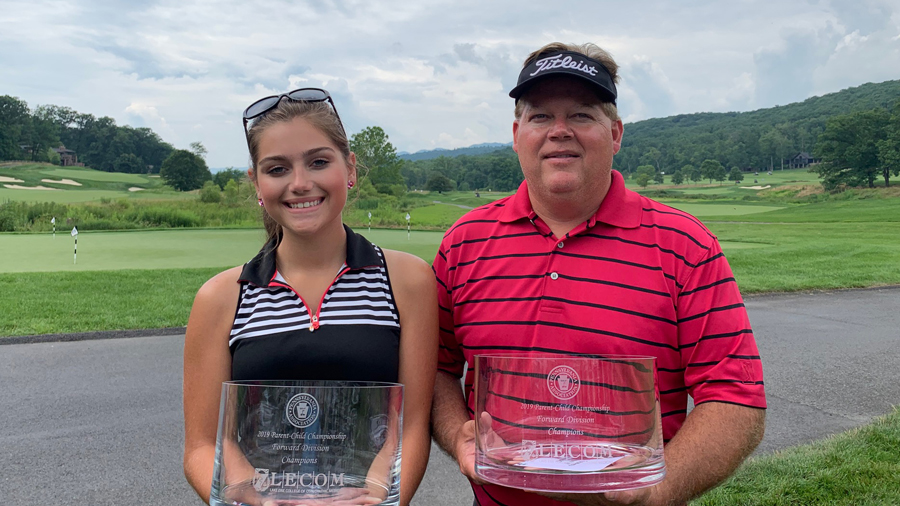 Grace Thomas and her father, Adam, a PAGA Individual Member, shot a second round 75 to win the forward division’s gross portion. They were the only team to shoot in the 70s on each round of the championship.

“Grace made a lot of long putts today,” Adam Thomas said. “That really kept our round going well.” 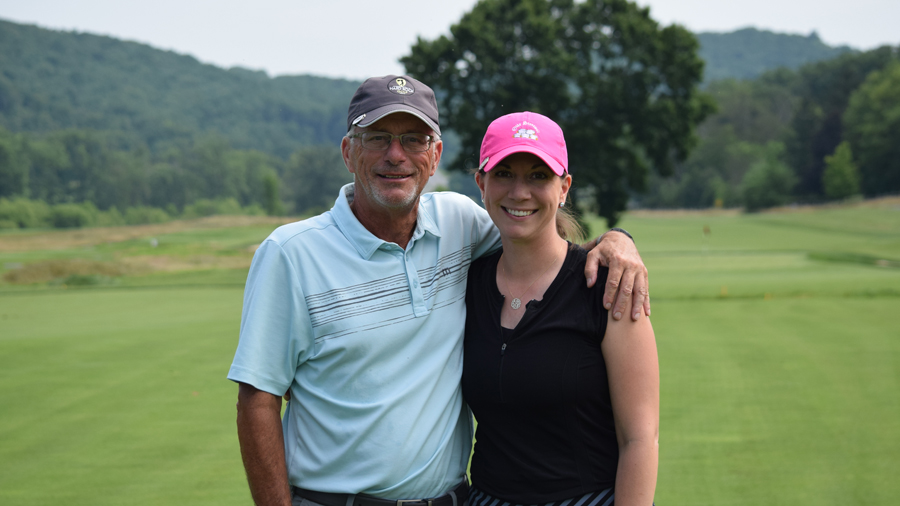 The professional division crown was won by Seven Oaks Country Club’s Larry Milosh and his daughter, Samantha Baldwin, who shot back-to-back under par rounds (69 and 70) to card a 5-under par 139 and claim the title.  "We just had such a fantastic time here this week and are so grateful for the opportunity to compete together as a team, we really had a blast," said Milosh.

There were also net competitions in each division with the exception of the professional division. Winning the Championship Net division was Overbrook Golf Club’s Ernie and Magnus Sims with a net score of 20-under par 124.

The Forward Net division was claimed by Tim and Ryan Wood of Schuylkill Country Club with a 17-under par 127.

The Parent-Child Championship Net crown went to Jason Barkley and his daughter, Emilee, with a score of 151 (+7).

The Parent-Child Forward Net division was claimed by Mike Lintelman and Chelsea Dukovich with a 15-under par 129.

The Pennsylvania Golf Association would like to thank Omni Bedford Springs Resort for the hospitality shown to competitors, and LECOM for the sponsorship of the championship.