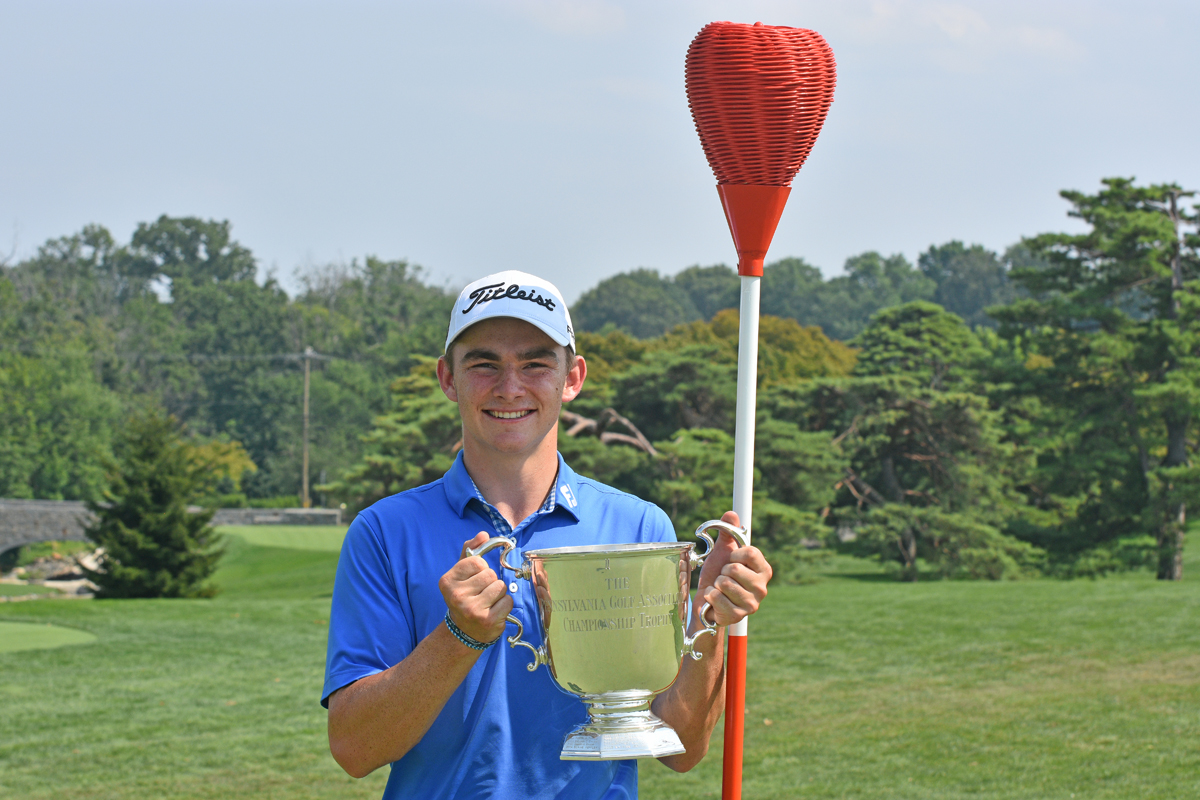 ARDMORE, Pa. - Move over, Ben Hogan. An iconic course. A historic event. And now, a legendary finish. Down a stroke and sitting in the 18th fairway at Merion Golf Club, John Peters was 193 yards away from the hole. Trying to hit it close to give himself a look at birdie, the incoming Duke University freshman did even better, as his 8-iron landed near the front of the green and rolled all the way back towards Merion’s famed wicker basket flagstick. As the large gallery surrounding the green started to murmur, the ball continued tracking and eventually tapped the flagstick and dropped, giving Peters an eagle and, minutes later, the championship of the 108th Pennsylvania Amateur, presented by DICK’S Sporting Goods.

“I was just trying to land it somewhere in that 175 number,” said Peters, of Carlisle Country Club. “We know how firm the greens are downwind and that it could run out. I was really just trying to hit it close and get a look at birdie because I thought there would be a playoff at 1-over par.”

Instead, on a hole where there wasn’t even a single birdie posted in Wednesday’s final round, Peters made eagle to finish at even par overall to win the championship. A day full of the expected drama at Merion finished with a shot that no one imagined. But Patrick Sheehan, the leader entering the final round, still had a chance. His approach shot, just prior to Peters’ now famous 8-iron, left him about six feet for birdie. However, he couldn’t convert the putt, giving the title to Peters.

“It’s a testament to it’s never over until it’s over,” said Peters. “I wasn’t even thinking about it [going in]. Obviously there’s a bit of luck there. I was waiting for some kind of clap but I thought it was long, then we heard a big hurrah. I’ve never experienced anything like that. It’s just a tremendous blessing.”

The drama unfolded early and often on the famed East Course. Sheehan entered with a three-shot advantage, which was gone by the time the final group was on the fourth tee as he opened with three consecutive bogeys. Peters got under par for the championship with a nice birdie on No. 1, as he hit a nice drive followed by an even better approach to leave himself a 10-footer for birdie, which he drained.

The third player in the final group, Jimmy Ellis, was attempting to add the Pennsylvania Amateur at Merion to his win in last year’s Pennsylvania Open at Oakmont, and was at or near the top of the leaderboard all day. With nine holes to go, there were nine players within two shots of the lead.

Suddenly, it looked like Hannastown Golf Club’s Mark Goetz was the player to beat. The West Virginia University golfer played the front nine in 1-over par but birdied No. 10 and No. 15 before hitting what most people in attendance assumed was going to be the shot of the day. After his drive on the 429-yard 16th landed in the quarry, Goetz hit an incredible shot to reach the green, where he was able to save par. After two more pars to close out the round, he was in the clubhouse at 1-over for the championship with a 69 in Wednesday’s round, tied for the lowest round of the day.

The next contender was Joshua Ryan of The 1912 Club, who had some chances to tie Goetz down the stretch, but just couldn’t get the needed birdie as he finished at 2-over par.

It was down to the final pairing to upend Goetz’s quest for a title. First, Sheehan birdied the par 3 17th, a stout hole under any circumstance that measured 241 yards and was into the wind with a back right hole location on Wednesday. At that same time, Ellis nearly chipped in from the left rough but settled for a par to stay at 1-over.

As they approached the 18th tee, Goetz was in the clubhouse, while Sheehan and Ellis were tied with him and Peters was a stroke behind. Then, near the site of Hogan’s famous 1-iron shot that helped him win the 1950 U.S. Open, Peters made magic happen.

“I knew that I had a ton of adrenaline,” Peters said. “To be honest, I hit it just a groove thin maybe and that’s what helped it run out there.”

The crowd’s roar greenside was the indicator for Peters, as he couldn’t see it go in from his vantage point. The eagle moved him to even par for the round as well as the championship, and moments later, he was being presented with the championship trophy that seemed to be out of his grasp just a few minutes prior.

“It was really one of the most patient rounds I’ve ever played,” said Peters. “It’s a U.S. Open course and rightly so - even par wins it.”

After crossing Ardmore Avenue to Merion’s 13th hole, a short par 3, it looked like luck wasn’t going Peters’ way. His tee shot started a bit left, faded and went towards the flag.

“I thought it was going to go in,” Peters said, but unfortunately for him, his luck was still five holes away. The ball hit the stick about a third of the way up and bounced off the green about 35 feet away, where he was able to chip up and make the putt. The golf ball he used had a red scuff mark from the flagstick, and later in the round, that same ball made history from the 18th fairway.

The Pennsylvania Golf Association would like to thank the staff and membership of Merion Golf Club for the hospitality shown in hosting the championship. Thanks as well to DICK’S Sporting Goods for sponsorship of the event.