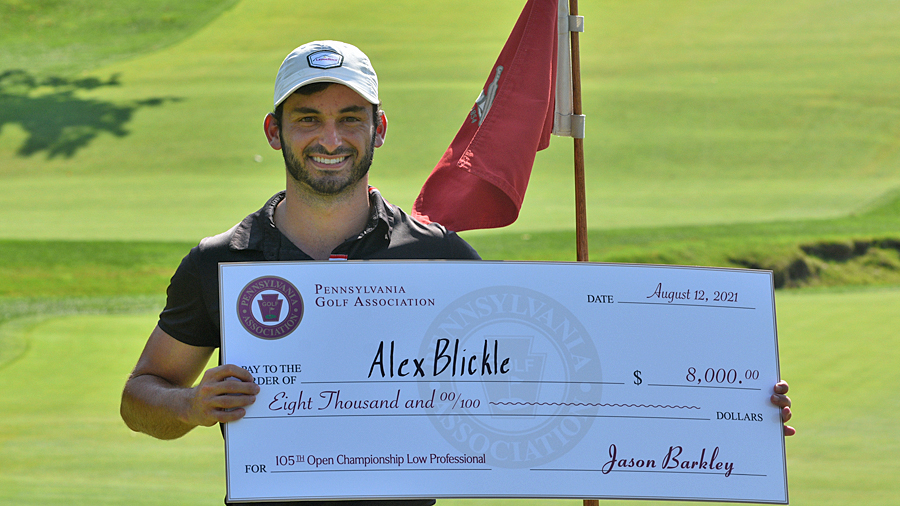 FLOURTOWN, Pa. - Alex Blickle had been through an emotional rollercoaster in the first three holes of the sudden death playoff against Jeff Osberg at the 105th Pennsylvania Open, presented by DICK’S Sporting Goods. From nearly winning the championship on the first playoff hole to needing help on the second to another near miss on the third, Blickle experienced it all.

But on the fourth playoff hole, he put his mind at ease. At 206 yards away in the left rough on the first hole of the Wissahickon course at the Philadelphia Cricket Club, he smacked a solid 7-iron around a tree that nestled within two feet of the hole. After Osberg missed his birdie putt, Blickle converted his own to win the championship and the $8,000 check for low professional. The players finished the 54-hole event at even par 210 after Blickle fired a 71 and Osberg a 73 in Thursday’s final round.

“It feels fantastic,” said the 29-year old Blickle, who forced a playoff with a clutch 12-foot birdie on the last hole in regulation.

That set the tone for the terrific shotmaking that would encompass the playoff. On the first hole (No. 18), both players hit good drives before Osberg’s approach landed in the left rough just above the greenside bunker while Blickle was on the back of the green. Osberg hit an excellent chip and was able to convert a nice par putt after Blickle’s birdie was slightly off.

“I noticed that his ball stayed in the upslope in the rough so I had a feeling he’d be able to keep it close to the hole,” Blickle said of Osberg’s up and down on the first playoff hole. “He’s such a fantastic player that you almost expect him to make it and he did.”

The players then turned to PCC’s first hole, where both were just short of the green in two. However, Blickle chipped into the uphill slope of the green and came up short, as his ball rolled back down toward the front of the green. Osberg, playing next, hit a nice shot that nestled up about four feet from the hole. Blickle had a long putt to try to save par that nearly went in.

“I really thought that was going in” he said. “Almost from the time it left the putter, I thought it was going in.”

But it stayed just outside the hole, leaving Osberg with a chance to win. However, his par putt just slid by, meaning that the golfers returned to No. 18 yet again.

This time, Osberg’s approach left a ball mark just inches past the hole and rolled to the back of the green, while Blickle’s went long but spun back onto the green just inside of Osberg’s. However, neither could convert the birdie attempts, and back to No. 1 they went again.

That set the stage for the shot of the tournament - Blickle’s 7-iron from 206 yards.

“I had a good lie and I’d been in the rough a lot this week so I was comfortable with what I had,” said Blickle. “The greens were soft from the rain so I knew if I hit it well I could get it close.”

Osberg also hit the green on that hole, but couldn’t convert his birdie, setting the stage for Blickle’s short putt to win.

“I just didn’t have good speed with the putter this week,” said Osberg, a PAGA Individual Member who was looking for his first state championship.

The win was the third of Blickle’s professional career, as he also won a mini-tour event in Indiana plus won the 2020 York Open. But this one was even more special, as his father was on the bag for about half of the day. Blickle’s caddie to start the day, a friend, had issues with the weather as the heat index reached 105 degrees and had to leave. So his father jumped on the bag and finished out the day, creating another memory on an already memorable week.

Tied for third were professionals Finlay Mason and Trevor Bensel, at 2-over par 212. Mason, an England native who is interning at the Cricket Club this year, posted an even par 70 on Thursday, while Bensel battled back after a double bogey on the opening hole to steady himself and shoot 73.

There was a four-way tie for fifth at 213 (+3)  among professionals Anthony Sebastianelli, Michael O’Brien, Matt Gurska and amateur Zachary Barbin.