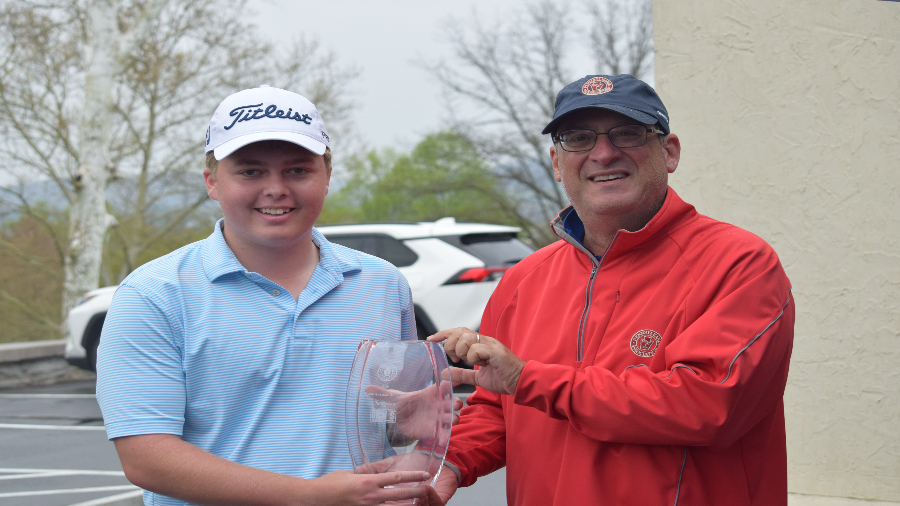 READING, Pa. – On a golf course filled with lots of ups and downs and undulations, the leaderboard at the second round of the 81st George Dressler Memorial at Berkshire Country Club similarly had a lot of movement. And at the end of the round, Josh Ryan of the 1912 Club birdied No. 17 and tapped in for par on 18 to finish on top with a round of 68 (-3) 36-hole score of 2-under par 140 to win the championship, which was presented by DICK’S Sporting Goods.

“This golf course was awesome,” Ryan said. “The greens were so hard and it’s great to come away with the win.”

Five players held at least a share of the lead in a cool and sometimes rainy final round, but at the end, it came down to Ryan and Tucker Sandercock of Steel Club. Sandercock birdied 18 to tie Ryan at 1-under, but the latter still had two holes to go, and he took advantage of them.

On the 370-yard par-4 17th, Ryan yanked his tee shot left and into the 18th fairway. With about 86 yards to go, Ryan’s approach one-hopped off the back of the green. About nine yards from the hole, Ryan’s chip found the bottom of the cup to give him a one-shot cushion heading into the last.

After checking the leaderboard, he went from his first choice of club (driver) to a safer option (4-iron) to yet an even more conservative option (6-iron).

“I knew par was good,” Ryan said, remarking about his one-stroke advantage.

The decision paid off, as his tee shot ended up in the middle of the fairway, about 115 yards away from the flag. Ryan hit a choke-down 50-degree wedge that landed four feet from the cup, giving Ryan two putts to win from that distance.

“That’s the first-ever four-footer that I lagged,” exclaimed Ryan. The birdie try was just outside the cup and he nudged in the par putt to win his second PAGA championship, as he also won the 2020 R. Jay Sigel Match Play at Country Club of York.

Sandercock began the round five shots behind leader Ross Pilliod, and for much of the afternoon, it seemed as though he was going to be the one with the comeback victory. He began about as well as possible, as he eagled the opening hole. An excellent tee shot led to him just off the green in two. His uphill chip shot rolled in and he was beginning a run that would get him to 5-under par on the day through 10 holes.

“Every part of my game was pretty much on,” Sandercock said of his first 10 holes, which moved him to the top of the leaderboard. “And then it started raining.”

The steady rain began in the middle of the afternoon, and Sandercock doubled the 13th and bogeyed the 15th. But despite losing his lead, he steadied himself and forced the tie on No. 18. He hit 4-iron to 80 yards and then his 60-degree wedge ended up two feet away for a short birdie to get to 1-under par for the championship before Ryan responded with the fantastic finish of his own.

Knapp’s performance earned him top honors in the Senior division, as his score was five shots clear of the contestants in that division.

In the Super-Senior division, Gregory Osborne of Overlook Golf Course fired a 2-under par 69 on Tuesday to separate from the field, posting a two-day score of 144 (+2) to win by six strokes over Vince Scarpetta, Jr. of Nittany Country Club.

“This is only my third time on this golf course, but this is a wonderful course,” Osborne said. “The greens were exceptionally fast and I played really above my ability.”

Osborne was a little disappointed after bogeying three of his final four holes in Monday’s opening round, but he got off to a good start.

“I had the speed down right away,” he said of the greens. “The putter worked both days and I don’t think I missed anything under five feet either day.”

The approach shots weren’t bad either, as his birdies on Tuesday were all within 15 feet.

The team championship was won by LedgeRock Golf Club's trio of Pilliod, Chris Storck and Grant Skyllas at 5-over par.

The Pennsylvania Golf Association would like to thank the staff and membership of Berkshire Country Club for the hospitality shown during the championship. Thanks as well to DICK’S Sporting Goods for sponsorship of the event.