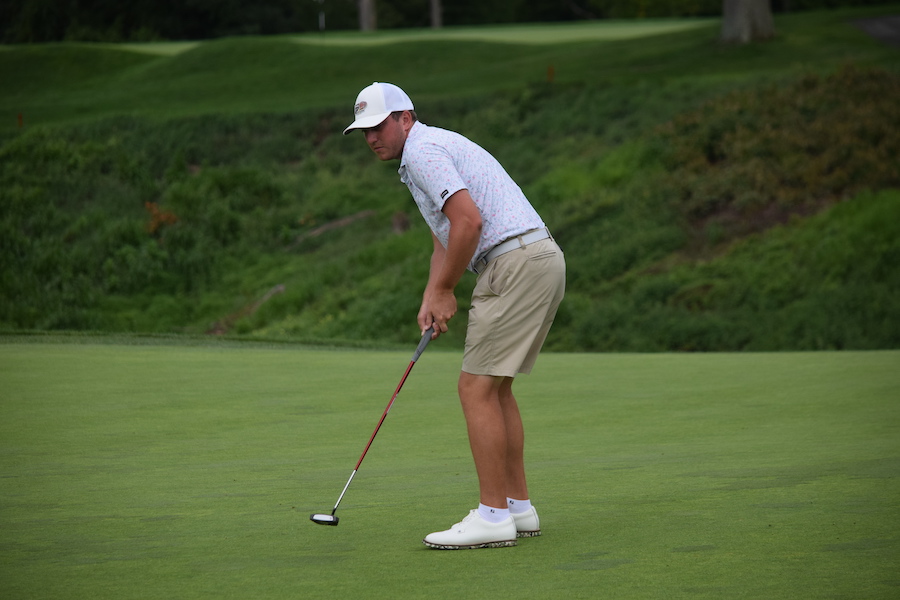 VERONA, Pa. - As Tanner Grzegorczyk remembers it, the last time he made a bogey was over a week ago in the first round of the 2022 Pittsburgh Open, where he made one on the 15th hole at St. Clair Country Club. At his home course, Longue Vue Country, Grzegorczyk has continued that one of the best stretches of his career. So far, he is bogey-free at the 106th Pennsylvania Open Championship, which was presented by DICK’s Sporting Goods, to catapult himself into the lead after two rounds with a total score of 132 (-8).

“I've been hitting it pretty solid,” Grzegorczyk said. “... This is definitely the best stretch of golf I have played in a long time.”

After posting a 66 (-4) in day one of the event, Grzegorczyk began his second round with a birdie on hole No. 9 (the starting hole for non-hole No 1 players). Then he played a back nine where he was even through the first eight holes until making a birdie on the 18th hole. On the front, where he recorded two birdies yesterday, Grzegorczyk started with one on the first hole. From there, he only had pars and one more birdie on hole No. 4 to finish with the eighth score of 66, for which Grzegorczyk had two of them.

Grzegorczyk's total score from the two days is two strokes better than the rest of the field. In second place with a 134 (-6) is Mark Goetz of Greensburg, who is tied with Venetia’s Jake Sollon. Goetz’s tee-to-green play has been strong as he has only missed one green through two rounds. However, he had struggled on the greens, limiting himself from shooting more than a 70 (E) on the first day.

But with a new putter, a vintage PING putter Goetz had just acquired, the Greensburg native notched five birdies and 13 pars in order to post a 64 (-6), the best course in the entire event so far. His stretch at the end of the front nine in particular helped Goetz move into second place. From the seventh hole to the ninth hole, Goetz recorded nothing but birdies. On the seventh, he secured a two putt from the back left of the green to the front right to nail the birdie. One hole later, Goetz made solid contact to go just past the hole and make another birdie. Then on the final hole of the front, he hit 3-wood off the tee and sunk a long putt. Still, Goetz thinks the challenge is just beginning for him.

“The pins are going to get harder for sure,” Goetz said. “There’s going to be a lot more break around the hole.”

Goetz recorded the lowest score of the tournament with a 64 (-6).

While Goetz relied on many birdies, Sollon relied on making eagles on two par 5s to counteract three bogeys. The Venetia native made an eagle on holes No. 4 and 15 and secured birdies on the seventh, eighth and 17th holes to move him to 134. Two strokes behind Goetz and Sollon is Penn State’s Jake Griffin, along with Anthony Sebastianelli.

Through the first days at the Open, Griffin was still getting used to the speed of the greens at Longue Vue Club, especially after not taking part in the tournament’s practice round. After the first round where he was two strokes behind the then-leaderrs, he thought he could improve his putting.

“Yesterday, I kind of struggled, but worked on it before the round,” Griffin said. “And I really focused on reading the greens today and I thought it a little better than I did yesterday.”

Griffin was steady to start his second round in the morning as he recorded seven straight pars on the front nine. On the next two holes, Griffin secured birdies thanks to ball striking that gave him short tap-in putts. At the start of the back nine, Griffin used his improved putting to record pars on back-to-back two putts. The Penn State golfer continued to remain near the top of the leaderboard despite a bogey on hole No. 17, finishing the day with a total score of 136 (-4). This tied him with Sebastianelli.

But Griffin had close competition behind him as well. Point Park University golfer Easton Renwick and head professional at Oakmont Country Club Devin Gee were the two morning players to post a 137 (-3). Among the players who teed off in the afternoon, 2022 PA Amateur champion and runner up Neal Shipley and Rij Patel also finished with 137. These scores certainly moved them far above the cut line, where only 40 golfers (plus ties) will play in the third and final round.