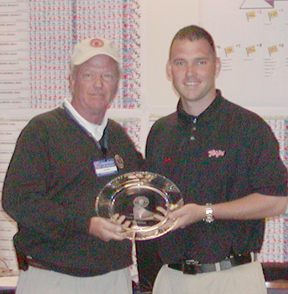 HARRISBURG, Pa. - The second round of the 66th George Dressler Pennsylvania Amateur Public Links was held on Sunday on the 6847-yard par 72 Dauphin Highlands Golf Course in Harrisburg, Pa. The course played firm and fast in the cool windy conditions. The field of 88 consisted of 80 Amateurs and 8 Senior Amateurs.

Late in the day on Sunday afternoon it was two familiar faces that showed up on top of the leader board looking to grab their 2nd Pennsylvania State tile. Jeff Daniels of Harrisburg, Pa. a newly reinstated amateur and 2001 Pennsylvania Open Champion and Peter Toole of Mt. Joy, Pa., the 2001 Pennsylvania Amateur Champion but it was Toole that would take the crown.

Toole carded five birdies and four bogeys in his final round, playing his last five holes 2-under par, to shoot a 1-under par 71 and edge out Jeff Daniels by one stroke.