Your browser does not support JavaScript!
Amateur Results 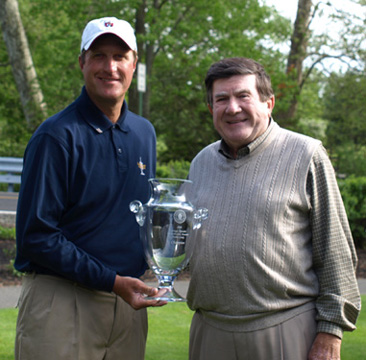 Sean Knapp, left, is awarded the championship trophy by

Sean Knapp, of Oakmont, PA, took home the first place prize in his first Public Links Championship try. He posted a stellar round of 67 to top the leaderboard after the first day, on the 6311 yard, par 70,  Ambassador Course at Hickory Valley Golf Club in Gilbertsville, PA.

After posting an even-par 35 on the front nine with a birdie and a bogey, he finished up with a solid 3-under-par 32 on the back side to post an opening round that would be hard to catch. David Denlinger, of Lancaster, PA, and Phil Rothermel, of Lyons, PA, posted rounds of 73 on the first day of competition to pose some threat to Knapp.

Leading by 6 strokes going into the second round, Knapp just needed to play conservative and let the round come to him. He posted a 3-over-par 39 on the front nine of the Presdential Course to remain 4 strokes ahead of the looming Shawn Lavin, of Drexel Hill, PA, who finished off his front nine with 3 birdies and a bogey on holes 5 through 9.

James Bohn, of Lewisburg, PA, who finished alone in third place was able to fight off a host of players vying for a shot at the lead. Bohn ended up parring the treacherous closing 17th and 18th holes to finish in third place.

Knapp remained on cruise control staying even on the first 6 holes of the back nine, shaking off the threats of the field playing in front of him. David Denlinger, Knapp's playing partner, still kept the pressure on coming down the stretch, posting a 1-over-par 36 on the back side of the Presidential. 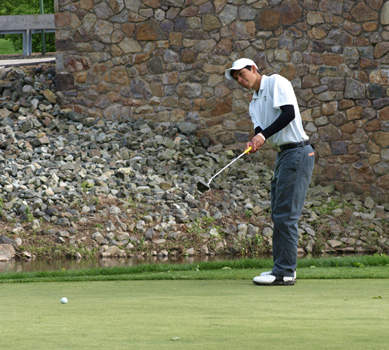 David Denlinger for birdie on the 18th green.

Sean Knapp held to his guns and finished the final 3 holes in a conservative 2-over-par.

"The course won today," said Knapp, when giving his acceptance speech. The day started off with rain and bitter cold looming, but ended with a bit of sun shine to cap the day. "Both courses are a true test and I really commend the staff."

The Senior Division was won by Ed Strickler, of Huntindon, PA, who finished with rounds of 78 and 80. His playing partner for the second round was on his heels all day; Jerry Janeski, of Lititz, PA, was with him the entire round but just couldn't catch him. Janeski, who started the day one back of the leader, found himself tied with Strickler through nine holes of the second round, but bogied 4 holes in a row, holes 8 through 11, to give Strickler back the lead going to the 12th hole.

Strickler held on, winning by two strokes to take home the hardware. Ed has been "the brides maid" twice in the past two years to Andy Tompos, who had to withdraw from the 2009 competition. 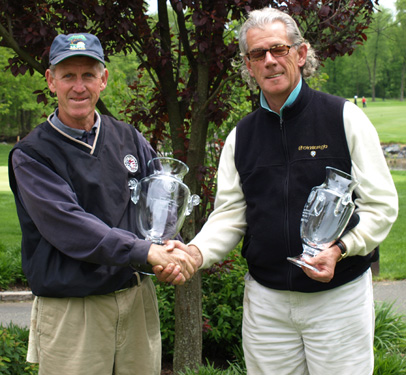 Ed Strickler, left, and Jerry Janeski with trophies in hand.