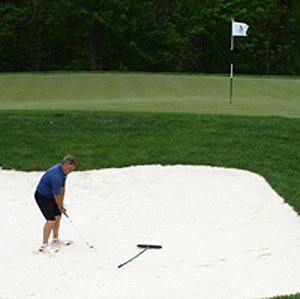 David Brown hit this bunker shot on #17 to 20 feet

and 2-putted to seal the victory.

David Brown, of St. Clair Country Club, had a tough road to victory. He started the Championship as the 16 seed and with a match-up against Nathan Smith, of Pinecrest Country Club, who might be the best player in the state right now. Smith hit every fairway, every green, and didn't make a bogey, yet he still lost to Brown 2 & 1.

Brown had 6 birdies and 2 bogeys to close out Smith in the first round. He then drew a match with the current Golf Association of Philadelphia Amateur Champion, James Kania, Jr., of Overbrook Golf Club. Kania won his first match in 19 holes over William Smith, of Chambersburg Country Club. Brown jumped out to an early 3-up lead against Kania, through 9 holes. Then Kania battled back to get back to 1-down through 12 holes before bogeying two of the remaining four holes to lose 3 & 2.

Next up for Brown was 17-year-old Nicholas Reach, of the Country Club of Scranton, who didn't make a bogey in the first two rounds. Brown carded 5 birdies in 13 holes and eliminated Reach 5 & 4. 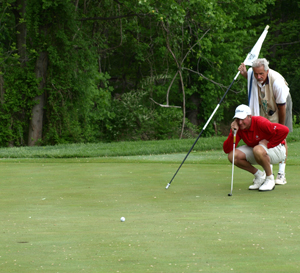 Sean Knapp missed this putt on the 17th green

to finish the match with David Brown.

The final match was against roommates...well at least roommates for this trip. Sean Knapp, of St. Jude Golf Club, and David Brown roomed together in the hotel while staying in the area.

Sean Knapp won 5 & 4, in the first round, over Gregor Meyer, of the Pittsburgh Field Club. Knapp then had to wait for Michael Brown, of Lookaway Golf Club, to finish his first round match which took 24 holes in which Brown beat Mike Vassil, of the Country Club of Scranton. Knapp closed Mike Brown out at 3 & 2 late in the evening on Monday.

David Brown shot out to an early lead against Knapp, 3-up through 9 holes. Knapp couldn't get his putter going in the final round, but wouldn't quit once Brown was dormie through 14 holes. Knapp rolled in a clutch 15-foot birdie on the 170-yard, par 3, 15th hole after Brown rolled his birdie try past the hole a few feet.

Then on the 408-yard, par 4, 16th hole, Brown hooked his 3-wood into the long rough on the left side of the hole leaving the door open for Knapp to tap in for par and take the hole. Brown, still 2-up with 2 to play, and Knapp striped drives down the middle of the 523-yard, par 5, 17th hole. They both hit 3-wood from the fairway and ended up on either side of the green, Brown in the left hand, greenside bunker, and Knapp in the long rough surrounding the right hand, greenside bunker. Both players two-putted for pars, and the match was over. David Brown took home the first Championship of the season. 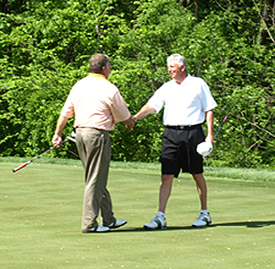 Four of the top five seeded players in the Senior Division were eliminated in the first round. Don Donatoni, of White Manor Country Club, was the #9 seed and won his first round match against Gary Daniels, of Applebrook Golf Club, 6 &5. He then faced off with Tom Bartolacci, Jr., of Saucon Valley Country Club, and both players carded rounds of  one-under-par 71, but Donatoni came out on top.

Mike Domenick, of Phoenixville Country Club, beat 2007 Senior Match Play Champion, John Benson, of Punxsutawney Country Club, in the first round. He then faced Gary Daniels, of Saucon Valley Country Club, and the match was never more than 1-up until the 17th hole where Daniels made bogey to concede the match 2 & 1. 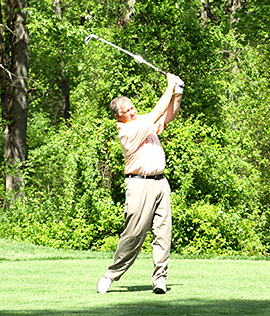 Mike Domenick hits his tee shot on the 15th hole

Donatoni beat Bob Allshouse, of Greensburg Country Club, in the semi-finals 5 & 4, and Domenick beat Sam Lewis, of Huntsville Golf Club, 2 & 1 to set up the final match.

Both players came out on fire with birdies on 8 of the first 10 holes (Donatoni with 4 and Domenick with 4) to keep the match all square through 10. Both players carded pars on the next 4 holes before Donatoni won holes 15 and 16 with pars. Then the players headed to the 499 yard, par 5, 17th hole with Donatoni dormie.

Donatoni ripped his driver to the end of the fairway leaving him with 230 yards to the flag. Domenick played his second shot to the fairway about 60 yards short of the green. Donatoni pulled out his 3-wood and hit the "best 3-wood of my life", said Donatoni. It ended up 12 feet from the hole. Domenick could not complete his birdie try and the hole was conceded to give Donatoni the Championship with a 3 & 1 win.