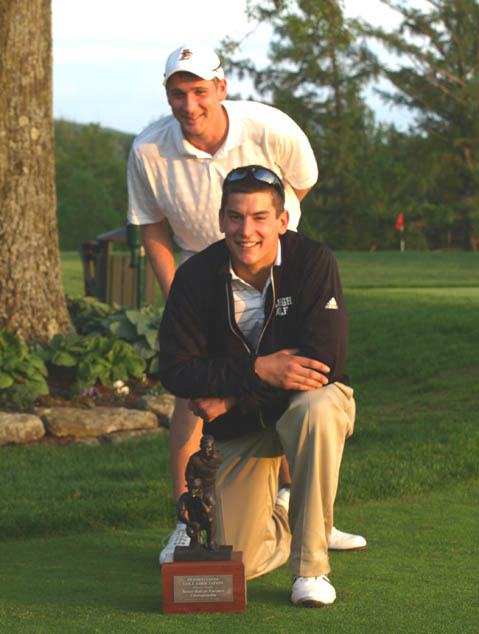 The champs pose with the Mayors Trophy

Clarks Summit, PA – The teammates from Lehigh University, Doug Marcincin and Andrew Arnold, played extremely well on the par 5’s during the 22nd Better-Ball Championship. The team carded two pars, three birdies, and three eagles on the longest holes at the 7,031 yard, par 72, Old Course at the Country Club of Scranton. Two of those eagles came in their final 7 holes.

2008 Better-Ball Champions, Eric Williams and James Gardas, of Honesdale Golf Club, held the first round lead after posting, a tournament low, 8-under-par, 64. They held a 1 shot lead at 9-under-par, after 27 holes, but were unable to match the final nine holes that the Marcincin-Arnold team put together. However, their final tally of 11-under-par, 233, was a fantastic run of golf and left them one-shot back, in second place.

The course was playing extremely difficult due to the weather that Northeastern Pennsylvania has dealt with this Spring. The fairways and greens were beautiful, but the rough was very penal. Driving the ball down the middle was crucial. 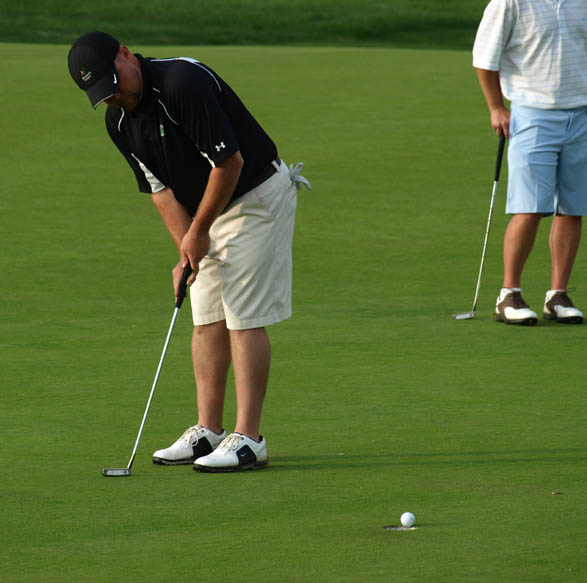 Eric Williams roles in this par putt on the 17th green

Andrew Mason, of Huntingdon Valley Country Club, and Michael Brown, of Lookaway Golf Club, had the second best finish of the final round with a score of 5-under-par, 67. They made a charge early in the round and made the turn one shot back of the lead with a front nine score of 32. They were unable to keep the momentum going after a bogey on the 406 yard, par 4, 10th hole. They finished two shots back and alone in third place with a score of 10-under-par, 234.

The local teen phenom team of Patrick Ross, of Elmhurst Country Club, and Nicholas Reach, of Glenmaura National Golf Club, had a small gallery following them for the entire event. There were high expectations for these two players. They carded a tournament low back nine score of 5-under-par, 32, during the first round of play. They weren’t able to get anything going in the final round, but finished in a tie for 4th, with a score of 8-under-par, 236.

The other team with a final score of 236 was Matt Dougherty and Patrick Mitchell, of Glenmaura National Golf Club. They rolled in 7 birdies in the first round, but were hampered by two bogeys. They followed it up with five birdies and two bogeys during the second round. 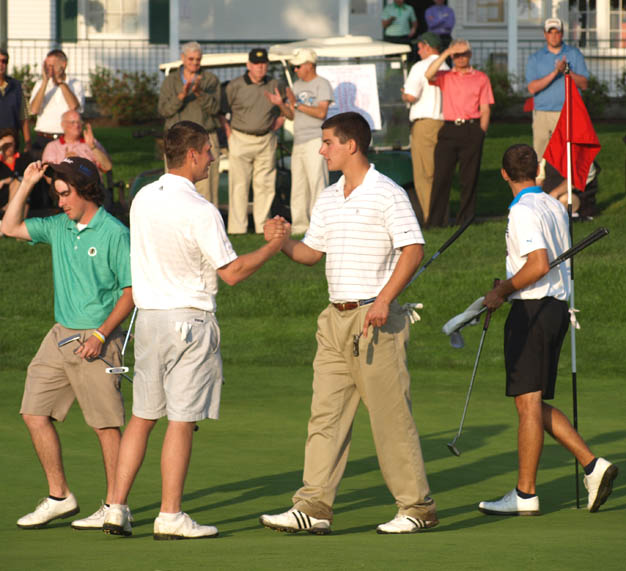 The Lehigh teammates played perfect golf in the final round, carding three birdies on the front nine and two eagles on the back nine. The rest were not under-par scores, but a few of them were just as good as a birdie. Arnold made a phenomenal up-and-down on the 476 yard, par 4, 16th hole, from the left greenside rough. Marcincin could not be outdone by his partner. He made his own up-and-down on the, extremely difficult, 248 yard, par 3, 17th hole. Two regulation pars on the 18th hole sealed the championship for them. 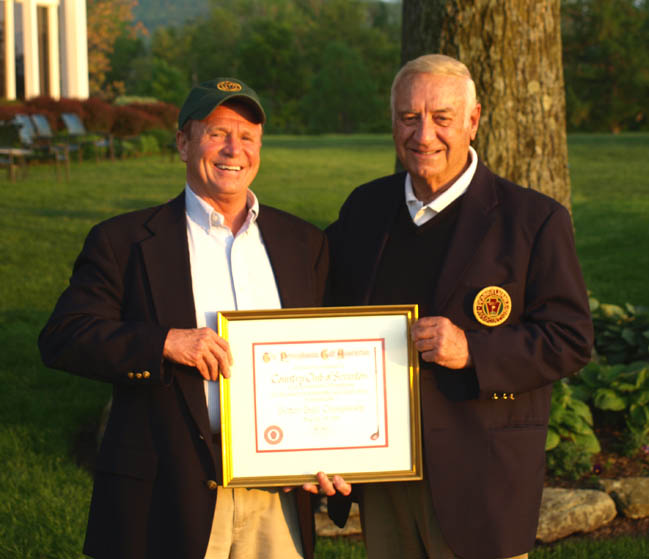 CC of Scrnaton President, Dr. Erhardt, is presented a gift

A special thank you to the membership at The Country Club of Scranton for allowing us to hold the event at their beautiful facility. The Golf Professional, Terry Hurst, the General Manager, Jim James, the Course Superintendant, Greg Boring, and their terrific staff should be commended for their efforts!