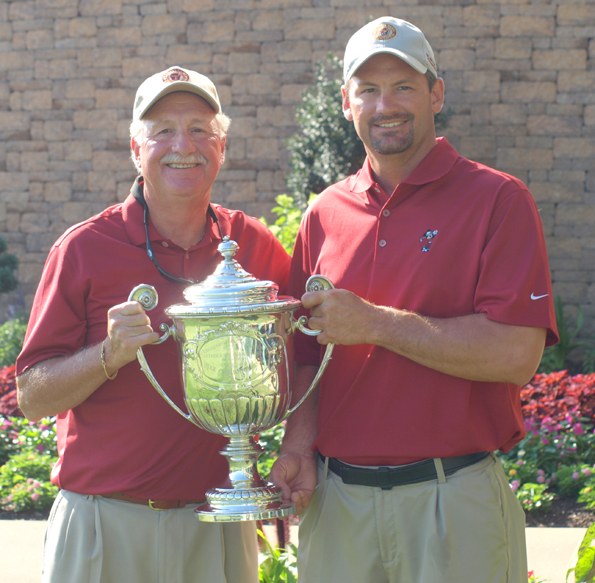 HERSHEY, PA – Heavy rain fell on the eve of the 4th Father-Son Championship, almost four inches, to be exact.  Fortunately, the Hershey Links Course withstood the onslaught from Mother Nature and round one (a double-shotgun at 8:00am and 1:00pm) would go on, as scheduled.

Two fine rounds of 5-under par 67 were carded on the popular Hershey Links (par 72, 6,537 yards) by Michael & Jim Johnson as well as Ron Weaver & Robbie Rowe.  Nipping at their heels was a strong group of contenders within three strokes of the lead.

The Landis’ and DuCarme’s each carded solid rounds of 68.  The Blickle’s, Falconer’s, Rothaus’, and Knox’s were just two shots back with rounds of 69, and at 70 were the Cooper’s, Francis’, Furman’s, and Gunerman’s.  All would sleep well knowing they controlled their own destiny going into round two at the rain-softened Hershey Country Club’s East Course (par 71, 6,645 yards).  Monday evening’s storms caused the East Course to shut down completely on Tuesday so maintenance crews could prepare the course for round two of the Championship on Wednesday.

In the final pairing of round two, the Johnson duo couldn’t keep the mojo going, carding two bogeys against 16 pars.  Playing alongside the Johnson’s, Weaver & Rowe seemed to be comfortably in control when they made the turn at 7-under par for the championship, but a bogey at hole 16 (par 3, 170 yards) and a double-bogey at hole 18 (par 4, 456 yards) would doom their hopes for the title.

Rob & Ryne Francis posted the early clubhouse lead with rounds of 70-69 for a total of 4-under par 139.  They would eventually be tied by Robert and Keith Falconer with rounds of 69-70, respectively.  Both would tie for third along with the team of Weaver & Rowe.

Vying for their first Pennsylvania Golf Association Father-Son title, King and son Tyler Knox made six birdies against one bogey to card a final round 5-under par 66.  Their rounds of 69-66 for an 8-under par total of 135 would best the field by two strokes.

The Knox’s got out of the gate fast with a birdie-birdie start to quickly make up the two-shot deficit they faced to begin the final round.  On hole 1 (par 5, 478 yards) Tyler smoked a 3-wood 250 yards uphill and onto the green for an easy two-putt birdie to get the team going.  Following a routine birdie at hole 2 (par 3, 180 yards), the champs had their only hiccup of the day, making a lone bogey at hole 3 (par 4, 448 yards).  From there, they would go on to birdie holes 6 (par 5, 515 yards) and 7 (par 4, 382 yards) to turn at 6-under par for the championship.  Another birdie at hole 10 (par 4, 393 yards) pushed them to 7-under, and a string of solid pars held the round together on holes 11 through 17.  Tyler’s 5-iron approach from the fairway to the final hole (par 4, 456 yards) found the rough just short and right of the green.  The stage was set for the Association’s President on the 36th hole.  Using a 9-iron, admittedly just trying to chip it to a makeable distance for Tyler, King watched the triple-breaker dive into the jar for the title-clinching birdie.  High fives and hugs ensued as the Knox’s made their way to the scoring area, and then to watch as the final groups finished just shy of their 135 winning total.

Rich and Ben DuCarme, just one shot back to start the day, played the final nine in 33 to finish with rounds of 68-69 and had hopes that their 6-under par total of 137 would be deserving of the title.  They would have to settle for runner-up honors.

In the Senior Division, champions James & Jim Usher came from three strokes behind with a sparkling final round of 2-under par 69 to go with their first round 73 for a total of 1-under par 142.  That number would win by four strokes over the runners-up, the Haag’s, who finished with 70-76-146, followed by the Marek’s with a total of 147, good enough for third.  John & Gregory Buliga matched the Usher’s final round of 2-under par 69.  They were the only sub-par final rounds in the Senior Division on the East Course.

In the Junior Division, the title of champion went to Robert Reed & Michael Reed-Price with fine rounds of 74-72 for a 3-over par total of 146.  Dave Fuhrer and David Fuhrer, II claimed runner-up honors.

In all, there were sixty Father-Son tandems all competing for the title of champion in their respective flights.  All competitors agreed it was sad to say farewell to the Hershey Links, which will be closing after this season.

The Father & Son Championship is played over two days, the first being played at The Hershey Links Course, and the second played on The Hershey Country Club's East Course. The competition is played in Chapman format: both players hit their drives on the tee, for the second shot player A hits player B’s ball and player B hits player A’s ball, for the third shot the players select which ball they would like to play alternately until the ball is holed.

A big thank you goes out to the members and staff of Hershey Country Club for hosting their 4th consecutive Pennsylvania Father-Son Championship.  Special recognition to superintendant Mike Malasavage and his crew for getting the courses back in shape after the difficult weather prior to the championship.