Your browser does not support JavaScript!
Senior Match Play Tree

Paul Schlachter is awarded the Championship Trophy from King Knox

CAMP HILL, PA; West Shore Country Club welcomed 24 of the top senior golfers from Pennsylvania for the 7th playing of the Senior/Super-Senior Match Play Championship. The field had to play through a chilly, rainy morning match, and if they were able to advance, the final three matches would not be decided by the weather.

Paul Schlachter, of The Club at Nevillewood, came in to the event as the number one seed due to the fact that Chip Lutz was unavailable for the event. Invitations are based upon the 2012 Senior Player of the Year standings plus the Senior Club Champion of the host venue. For the Super-Senior Division, invitations are based upon a players finish in the 2012 Super-Senior Amateur Championship. Lee Lykens has been the top 65+ player in the state since he surpassed that age in 2010. However, he was bested by Ed Hennigan in 2012, but Hennigan was forced to withdraw due to a nagging back injury.

Schlachter had an uphill battle on his hands in the first two rounds. He was pitted against Greg Johans, West Shore Country Club's Senior Club Champion. Johans gave Schlachter all he could handle, advancing the match to 3-up with four holes to play. Schlachter turned on the jets and was able to capitalize on a bogey-bogey-bogey finish from Johans.

Schlachter would then face a player who holds multiple Club Championships at West Shore CC in Scott Christie. Christie was able to advance to the Quarterfinals after defeating Joe Corsi, 2-up, in the morning match. 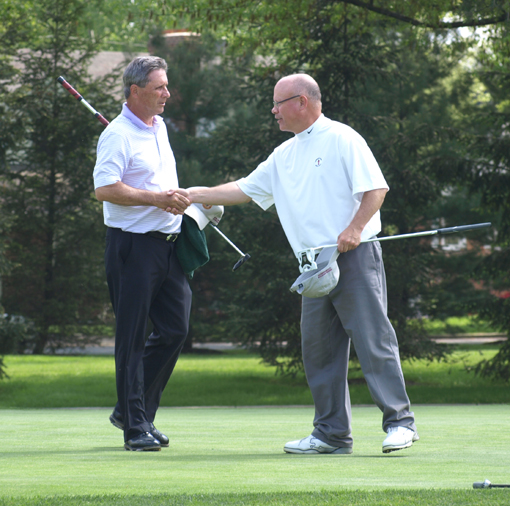 The match would be extremely tight all the way around, and would go back and forth 7 times. Neither competitor would have more than a 1-up lead until the 16th hole where Christie found his ball in the very long rough surrounding the greenside bunker. He was unable to extricate his ball, and would fall to dormie. They would halve the 17th and Schlachter would advance to play Tom Bartolacci, Saucon Valley Country Club, in the Seminfinals.

Roc Irey, of Lookaway Golf Club, was the number two seed for the event and faced off against Ed Knoll, of Deer Run Golf Club, in the first round. Knoll would take the lead, 1-up, on the 5th hole, and then the players would halve the next eight holes. Irey took a 1-up lead on the 16th, and halve the remaining holes for a 1-up win.

Irey, 2008 Senior Amateur Champion, would then face 2011 Senior Amateur Champion, John Rodney, of Diamond Run Golf Club. Rodney advanced through a match against Robin McCool, Saucon Valley Country Club, 2 & 1. The match would prove to be another grinding battle for Irey, who did not have a lead until the 16th hole. Rodney would bring the match back to all square with a birdie on the 17th, but would falter on the 18th with a bogey.

Irey would square off against Gary Daniels, Saucon Valley Country Club in the Semifinals. Daniels advanced with wins over Mike Vassil, Country Club of Scranton, and Jeff Poet, Country Club of York. Daniels was unable to grab any traction in the morning match against Irey, going 5-up through seven holes. Irey would finish off the match for a 5 & 4 win. 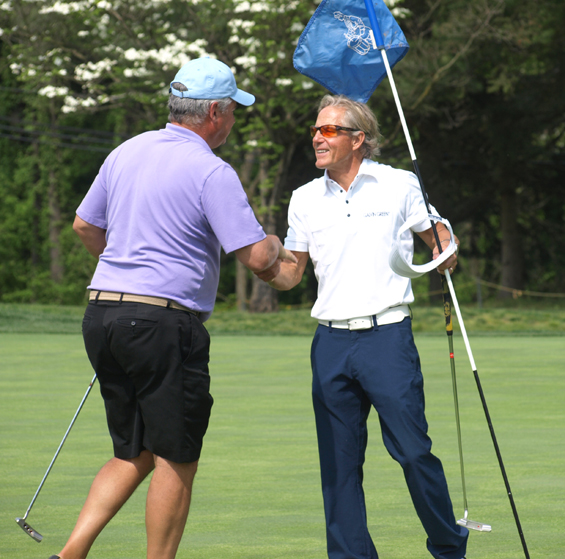 The number 1 versus number 2 matchup would turn into a chess match for the front nine. Neither player showing their hand, but Irey would post an even-par score for the front side that equaled a 1-up lead at the turn.

Roc Irey is awarded the Runner-up Trophy from King Knox

Then Schlachter felt some urgency. He would eagle the 487 yard, par 5, 12th, and Irey gave back a couple with bogeys on the 11th and 13th. Three holes in a row and then a wayward drive on the short 305 yard, par 4, 15th, had Irey on the ropes. If that wasn't enough, Schlachter kept the pedal down. He would hit a perfect 5-iron from the rough on the 16th to 4 feet. Irey had an uphill chip that looked in the whole way, but slid by. A gentlemenly concession, and the 4th Match Play Championship in 6 years was Schlachter's to hold.

Lee Lykens, Clearfield-Curwensville Country Club, faced Thomas O'Rourke, of Chester Valley Country Club, in the first round. Lykens shot out to an early lead that was mostly in part to O'Rourke's struggles. Lykens was even-par at the turn, but held a 5-up lead in the match. Three pars were enough to close out the match 7 & 6. 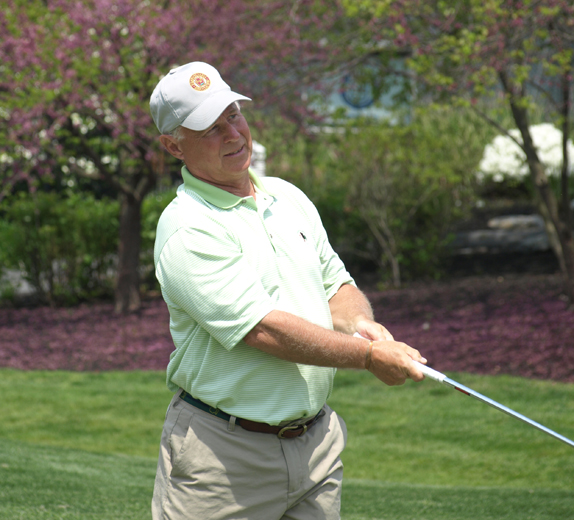 Lykens and Elias would halve the first 5 holes before any blood was drawn. Lykens would take a 2-up lead and then give it right back. The match was all square at the turn. Lykens would then take a 2-up after the 14th hole and eventually be dormie on the 17th. Elias shortsided himself to the left of the green and would be unable to get up-and-down to send Lykens to the final.

Carl Everett, of Merion Golf Club, lost the first three holes of his opening round against Warren Deakins, of Philadelphia Country Club. Everett was able to right the ship and get the match back to 1-down before winning four straight holes and eventually win 4 & 3.

Everett would then face off with, the legendary, King Knox, of Lancaster Country Club. Knox was able to advance with a win against Ed Gregoczyk, of Glenmaura National Golf Club, 2 & 1. 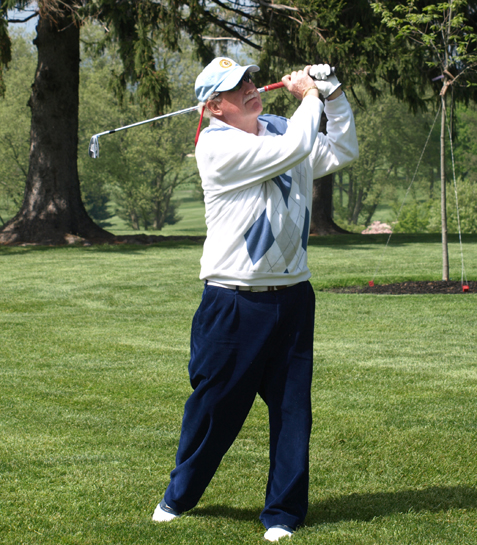 Knox would garner a 2-up lead through the first nine holes before faltering on the back, losing four of eight holes to lose 2 & 1. Everett and Lykens would meet for the final match the next day.

The final match would see one halved hole in the first six, and Everett would take a 1-up lead to the back nine. Lykens would fight back twice to get within 2 holes down, but could not muster enough shots to defeat Everett. A wayward drive on the 17th would do him in. The players would halve the hole with bogeys and Everett took the home the Championship.