Your browser does not support JavaScript!
Knapp and Strickler Back-to-Back Winners 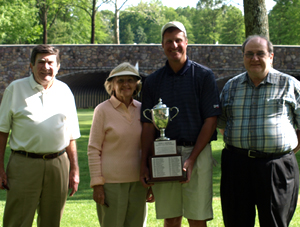 Gilbertsville, PA - Sean Knapp, of St. Jude Golf Club, won his second Amateur Public Links Championship in back-to-back fashion. He is undefeated in the event, as he only became a public links player in 2009. He won the 2009 Championship without breaking a sweat, but this year's Championship field was set to get back at him.

Knapp started the second round five shots off of the leader, Thomas Timby, Jr., of The Bucks Club. Thomas carded an opening round of one-under-par, 69, which included 3 birdies and 2 bogeys. He relinquished his lead in the second round after carding a triple-bogey on the sharp dogleg, 413 yard, par 4, 8th hole. 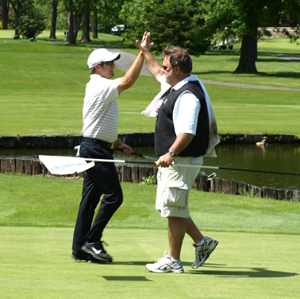 Dan Charen and his caddie/father celebrate after

Knapp was steady all day on Sunday with 3 birdies and 3 bogeys, while the rest of the field fell back to him. Daniel Charen, of Makefield Highlands Golf Club, and also an Ohio State Buckeye golfer, held the lead at +2 through 27 holes. But with a bogey on 11, double bogey on 13, and a bogey on 17 he was one shot back of Sean Knapp. Charen had a 10 foot putt on the 18th green to force a playoff, but it just slid by on the high side.

Knapp posted his 4-over-par score of 144, and watched Charen's putt slide by, but that wasn't the end of the dramatics. Timby had a chance to force a playoff with a birdie at the last. He striped is drive to the right side near the end of the fairway on the 348 yard, par 4, 18th hole. His approach went right over the flag stick about 18 feet and spun back to about 12 feet from the hole. He had a left to right putt, down hill, and it just held out to the left and stopped just on the lip, and that sealed the victory for Knapp.

Ed Strickler, of Huntingdon Country Club, also completed a back-to-back win on Sunday in the Senior Division. He posted the low first round score, 5-over-par, 75, and never gave up the lead. Two-time Senior Public Links Champion, Andy Tompos, of Lancaster Host Resort, started the second round one shot behind Strickler, but just couldn't catch him. He ended up in a tie for second at 151. 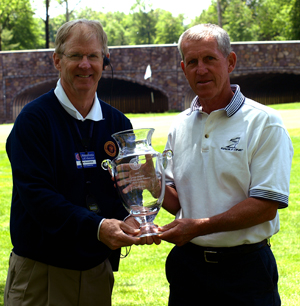 Fred Riley, of Toftrees Resort was in the first pairing in the morning and went out guns blazing! He posted a score of 32 on his final nine holes with three birdies and no bogeys, to post the low round of the tournament in the Senior Division.

A special thanks to Hickory Valley Golf Club's staff and ownership for a fantastic job again this year!