Your browser does not support JavaScript!
Amateur Division Scoring 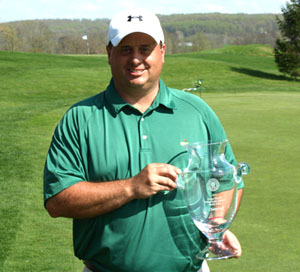 Carded back-to-back rounds of 70 to take the title

Honey Brook, PA - Rod James thought he was playing for second place after he parred the 15th hole in the second round on Tuesday. He had seen the leaderboards throughout the course and Artie Fink, Jr., of Sinking Valley Country Club, had a two-shot lead at that point. Fink birdied the brutally long, 545 yard, par 5, 15th hole, which had given players fits due to the extremely wet conditions.

James was in the final pairing with Jordan Shuey, of Mechanicsburg, PA, the first round leader, and Chris Lawler, of Raven's Claw Golf Club. Artie Fink was in the group just ahead of him, so James was able to see what was going on in front of him. He proceeded to lay back off of the tee, on 16, with a 5 iron and dropped his wedge to 10 feet. Before he hit the putt, an official told him that Fink had bogeyed 16, and also missed the green on the 185 yard, par 3, 17th. Ice water running through his veins, he drained the putt.

Fink ended up with a bogey on the 17th and left the door wide open for James. Rod followed up his birdie with a solid par on 17. A three shot swing over those two holes gave James the lead standing on the 18th tee. He bombed a drive, that was helped by the strong 20 mph wind the players were faced with all day. He was left with a full wedge into the green on the 402 yard, par 4, 18th. He wanted to just play safe and aim for the center of the green.

"I caught it a little thin and it bounded over the green. I thought I had just given it away" said James after accepting the trophy from Association President, Dr. Pete Richter.

His shot ended up a few yards over the green in the thick rough. James then chunked his chip and was left with 16 feet for par and the Championship. Needless to say, he rolled it in with a fist pump!

Mike Owsik, of the Philadelphia Public Links Golf Association, took home the Senior Division Championship. He had some heavy competition from his playing partner, Ed Strickler, of Huntingdon Country Club. Strickler and Owsik matched each other's scores for the first three nines, finishing the first round at one-over-par, 71, and following that up with a two-over-par, 37, on the front nine of the second round. 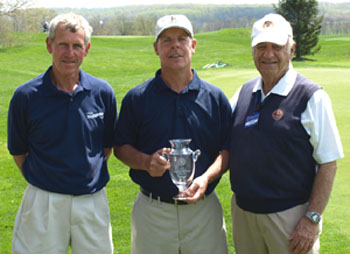 A double-bogey on the final hole for Strickler was not at all what he had envisioned. Owsik took advantage and rolled in a safe bogey putt which sealed the victory. Andy Tompos, of Lancaster Host Resort, finished in third place with back-to-back scores of 75.

A special thank you to all of the staff at Honeybrook Golf Club, and especially the Golf Professional, Ryan Gray, and also the owners, Tom and Ted Piersol, and Donna Horvath. 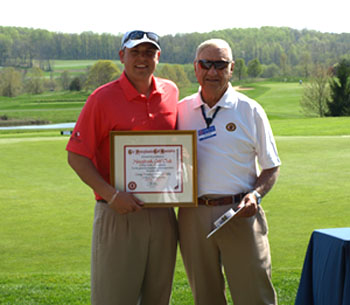 Ryan Gray (left) accepts a gift from the President

Thank you to all that competed and we hope to see you all again next year!