Your browser does not support JavaScript!
Final Scores 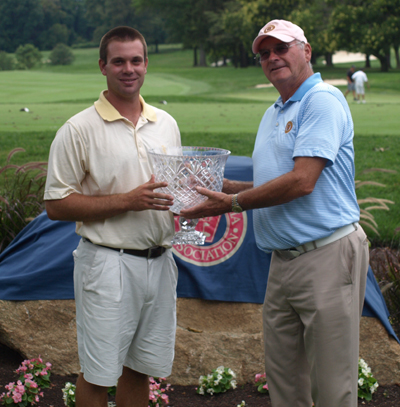 Springfield, Pa – The 99th Amateur Championship is in the books, and it can only be described with one word, “thrilled.” That’s how Andrew Mason felt after successfully defending his title. Mason could not stop smiling when talking about how it felt to go from winning the Golf Association of Philadelphia's Open Championship to the State Amateur Championship in back-to-back weeks. Mason, of Huntingdon Valley Country Club, became the 1st defending champion to repeat since 1982-83, when Buddy Marucci, Jr. did so.

Mason’s championship round did not start off the way he had envisioned. On the first hole (par 4, 419-yards), Mason hit a great shot that somehow nipped, and came down into a divot. His chip up to the green would roll back down and he would be forced to chip up again, and bogey the hole. While Mason would bogey the hole, Brandon Dalinka would pull within two shots, with a birdie.

After another bogey on 2 (par 4, 450-yards), Mason would head into the par 3 third, with just one thought, “Just get it on the green. Stop [messing] around.” Mason would par the next three holes to maintain at least a share of the lead.

Much like Mason’s ups and downs, the leaderboard would have plenty of changes during the final round. Thru three holes, The 99th Championship would have three leaders at 3–under for the tournament: Anthony DeGol, Nathan Smith, & Andrew Mason. DeGol, of Scotch Valley Country Club, would birdie the 2nd to get to 3–under, while Smith, of Pinecrest Country Club, made three spectacular par saves to keep even with Mason.

On 4 (par 4, 394-yards), Smith would gain his first lead of the tournament. Smith’s approach shot landed just past the flagstick, and gave him a challenging birdie putt that he would sink, and bring him to 4–under for the tournament. 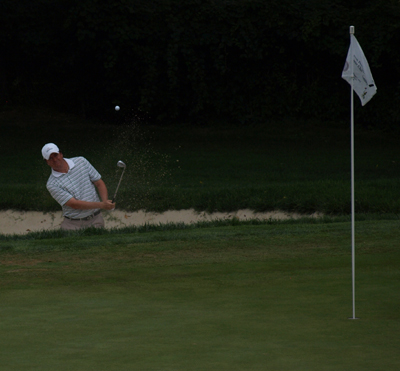 While Smith was going up on the leaderboard, Daniel Charen was moving in the opposite direction. Charen, of Makefield Highlands Golf Club, had a disappointing bogey on the 1st, and then again on the 5th (par 4, 426-yards), to put him 1–over for the tournament.

After a second round that put Jeff Osberg five shots off the lead, he would begin his final round slowly. The first four holes Osberg, of Llanerch Country Club, made even par and made up little ground on Mason. On the fifth hole however, Osberg would begin to start his string of three straight birdies. His birdie on the 6th (par 3, 207-yards), put him in a four way tie for the lead with Mason, DeGol, and Nathan Smith (who would bogey the 6th).

With the seventh hole coming up, a short par 5 (501-yards and statistically the easiest hole), the lead pack would all go to 4–under for the tournament. Going into 8 (par 4, 44-yards) both Smith and Osberg would face tremendous challenges. Osberg’s approach shot found the greenside bunker and presented him with a pitch out that could easily roll off the far side of the green. After a spectacular pitch out, the 8th green was just too quick for Osberg, and he would give a stroke back to fall to 3–under. 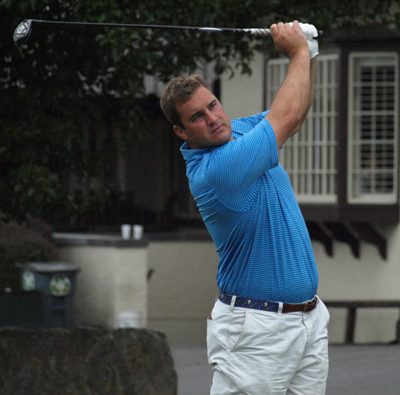 Smith would find his tee-shot sitting just above the creek in the fairway. Electing to play, and not drop & take a one shot penalty, Smith was left with a dangerous uphill lie. Taking an awkward stance, Smith successfully got out of it, and came to rest just below the green. Smith would walk away from a potentially championship round ending situation, with a bogey and fall to 3–under.

Heading to the turn, the two lead groups would go out with Mason & DeGol at 3–under, while Smith, Osberg, and Brandon Dalinka were one shot back of the lead, at 2–under.

On 10, statistically the second most difficult hole (par 3, 258-yards), Osberg and DeGol would give yet another stroke back, “I just made a mess of 8, 9, & 10,” said Osberg. Osberg was not alone however, as the 10th only surrendered four birdies all week.

The 12th hole would see one of the leaders fall from championship contention. Dalinka’s tee shot found the rough on the left side of the fairway, and 80-yards from the green. What seemed to be a routine up and down, turned into a nightmare. His approach shot found the front greenside bunker, and his third shot put him 40-feet away with a steep drop just behind the hole location. 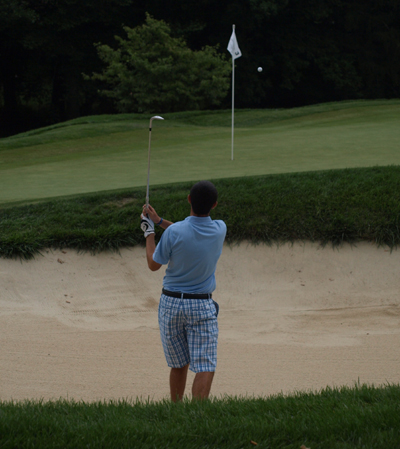 Dalinka’s par putt ran past the hole and down the backside of the green. After a 15-foot chip to get him within ten-feet, Dalinka would two-putt and card the second triple bogey on 12, all week. Dalinka, now 1–over, was seemingly out of the championship race and couldn't recover. He would end with a score of 78, and 6–over for the championship.

While Dalinka’s championship hopes faded, Mason’s were becoming a reality. His tee shot on 13 (par 4, 442-yards) put him in the middle of the fairway, and a chance to get on the green for birdie. A disappointing effort left him just off of the green, shortsided, and with a shot, that if he missed, would put him 50 feet down a steep slope. Mason’s 20-foot chip somehow found the hole and gave him a temporary one shot lead over Smith, who still needed to hole his par putt. Smith’s par putt missed by inches and left him with a tap in for bogey, and a two shot deficit. 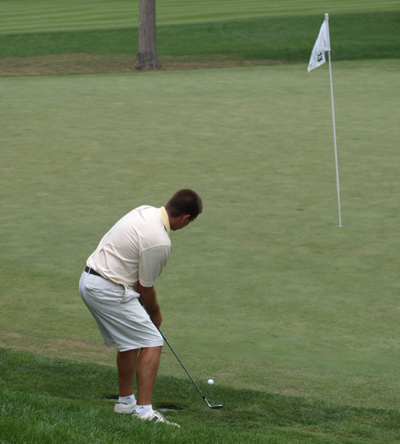 Andrew Mason holes this chip on the 13th

Much like Dalinka, Smith would not be able to recover from his bogey. Smith would go on to par the next four holes, before ending on 18 with a bogey and put him tied for fifth with Anthony DeGol at 1–over, 211.

While Osberg’s eagle putt would not fall, Charen’s successful 10-foot eagle putt, on 17, would take him to 3–under for the tournament and put some pressure on Mason to make quality shots. Walking to the 17th tee box Mason had no idea that Charen had just pulled to within one shot, so he elected to go with driver off the tee and try to clear the fairway bunkers.

“I didn’t see that Charen had eagled. [I just] hit is hard,” said Mason. “I almost always hit a fade, and it didn’t fade.”

Mason’s tee shot found the bunker and an impossible lie on the up-slope. From there Mason needed to play conservative and let Charen try to make birdie on 18.

“I hit a perfect wedge shot right where I wanted to,” remarked Mason. “I wasn’t thinking bogey, but I didn’t think I was going to birdie either. I was [going for] 20-feet to just give myself a chance and a two-putt.”

Mason’s two-putt turned into a 20-foot birdie putt, and all but sealed his championship victory. All Mason had left, was the 18th, par 4, 493-yards & statistically most difficult hole of the week. Mason’s tee shot found the fairway and left him with a long iron into the undulating green. His iron shot would land 25-feet from the hole and leave him with a two-putt for par, and his second Amateur Championship in a row. 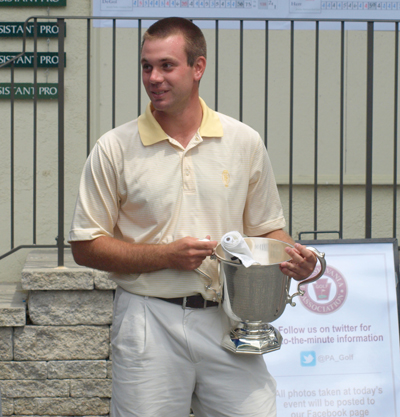 Andrew Mason speaks to the crowd

Mason will now compete in the USGA Amateur Championship, August 13-19 at Cherry Hills Country Club, in Cherry Hills Village Colorado. In Addition to his victory at Rolling Green Golf Club, Mason has now put himself in the top three of the State Team Point Standings, which proves to be some of the strongest three golfers in quite some time.